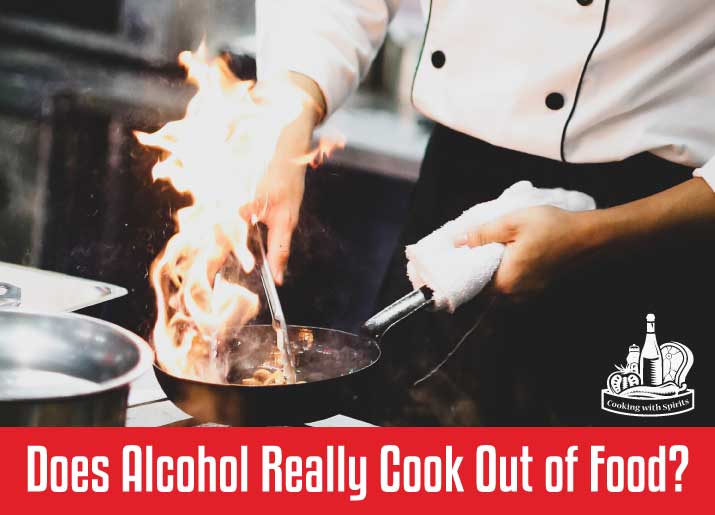 When you cook with alcohol, the amount that'll remain at the end is hugely variable depending on how you cook it. I know, your cookbook may have promised that alcohol simmers off after being exposed to high heat but that's just not completely true.

The Science and Proof

A study from the U.S.D.A. Nutrient Data Laboratory showed that it can take longer than 2.5 hours for all the alcohol to be cooked out of food. The study showed that the amount of alcohol remaining depends in part on the cooking method. Brandy that has been “flamed” – poured on foods and then set alight, approximately 75 percent of the alcohol remains after the flames have died down.

The study also revealed that alcohol content diminishes with cooking time. After being added to food then baked or simmered for 15 minutes, 40% of the alcohol remains. After cooking for an hour, only about 25 percent will remain, but even after 2.5 hours of cooking, five percent of the alcohol will still be there. Of course, the amount of alcohol in an individual serving will be quite low.

We think so but not because we think you're going to get drunk of our pasta sauce. It's important to understand how much alcohol may be left when deciding who to serve it to. We understand that people need to avoid alcohol for various reasons, such as to guard against alcoholic relapse, to protect a fetus, or to avoid adverse reactions that might be brought on by certain medications.

Before taking on a demanding beef bourguignon, make sure that booze complies with your dinner guests since your dish will still retain some of the alcohol.

Use the proper measuring device and don't more than is called for. The old adage "a little goes a long way" is very true when it comes to adding alcohol to recipes.

This site uses Akismet to reduce spam. Learn how your comment data is processed.